The Sassi of Matera: UNESCO Heritage

What you need to know, what to visit

The Sassi of Matera are not just the Old Town of the city. You can find that on the “Piano”, among the XVI century Piazza del Sedile, the baroque via Ridola, the narrow Via delle Beccherie with its medieval look, the simple beauty of Piazza San Giovanni, the blinding brightness of Piazza Vittorio Veneto. The Sassi and the Civita are rather Matera’s Ancient Town. They are the result of the symbiotic relationship between men and environment, started in Prehistory and gone forward, without interruption, until nowadays. They were born as Neolithic villages and developed into Bronze and Iron Ages settlements, Early Middle Ages pittagi and modern vicinati (neighborhoods). Farmers, shephards, artisans and monks chose to settle here, carving their churches, workshops, houses, mills, alleys, kitchen gardens, terraces, cisterns and wells from the same rock, creating a beautiful, anarchic fresco full of chiaroscuros.

The traces left by people during the centuries are still hiding here and there: visible (archaeological, architectural, pictorial) and invisible signs, survived in the stories held by senior citizens and in the topononymy. If you want to know them, all you need to do is to book your guided tour with a professional guide. 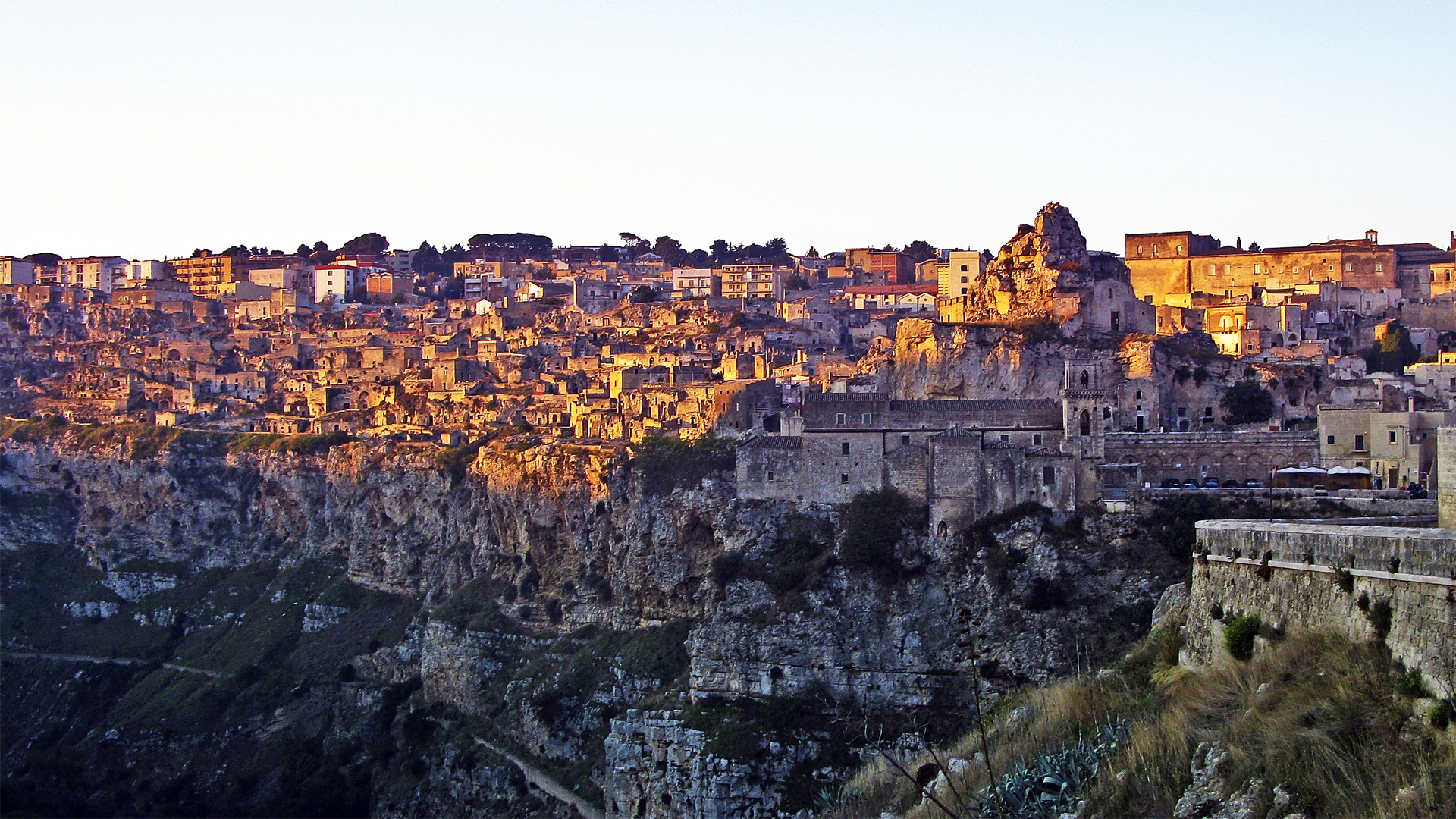 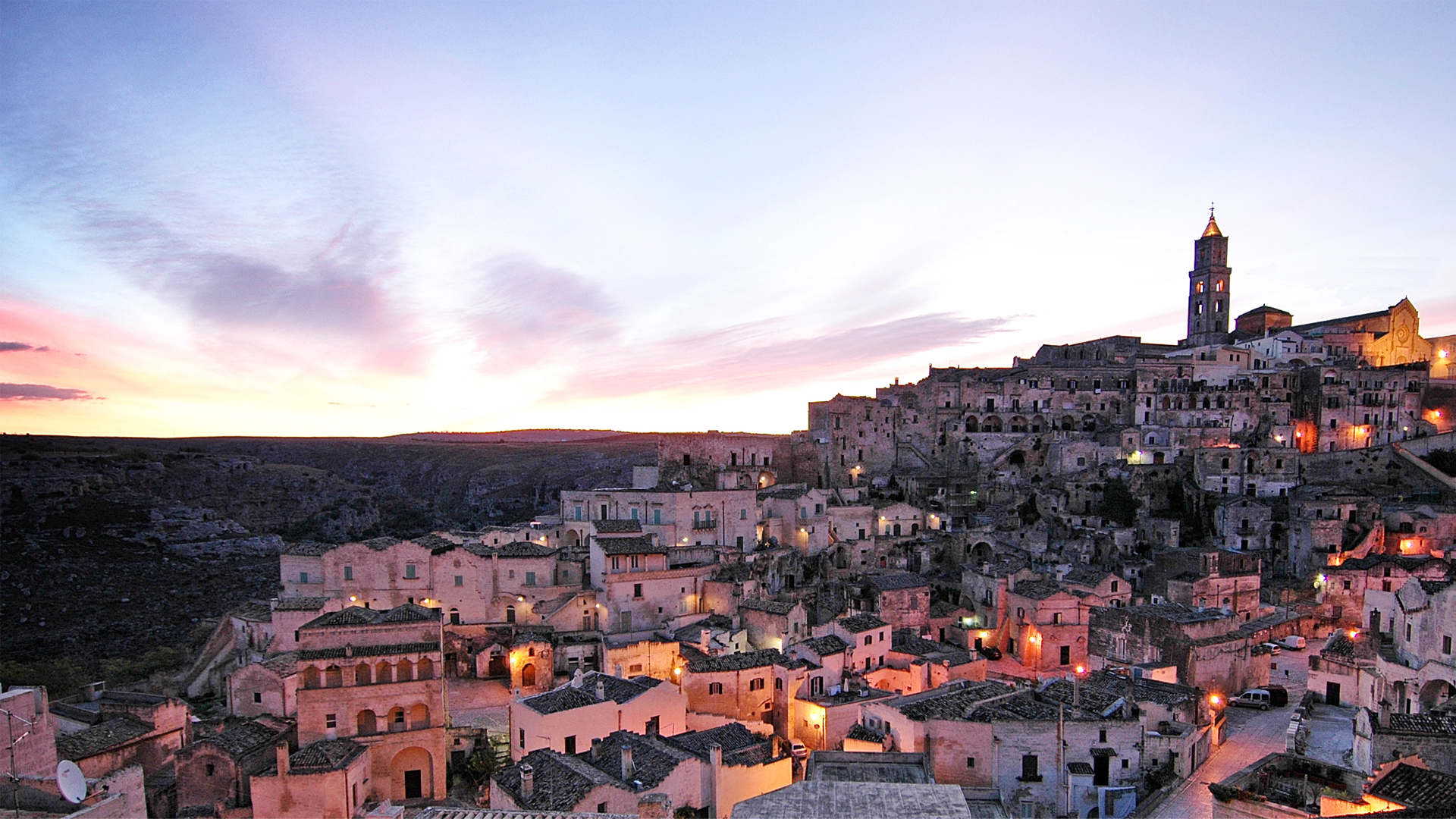 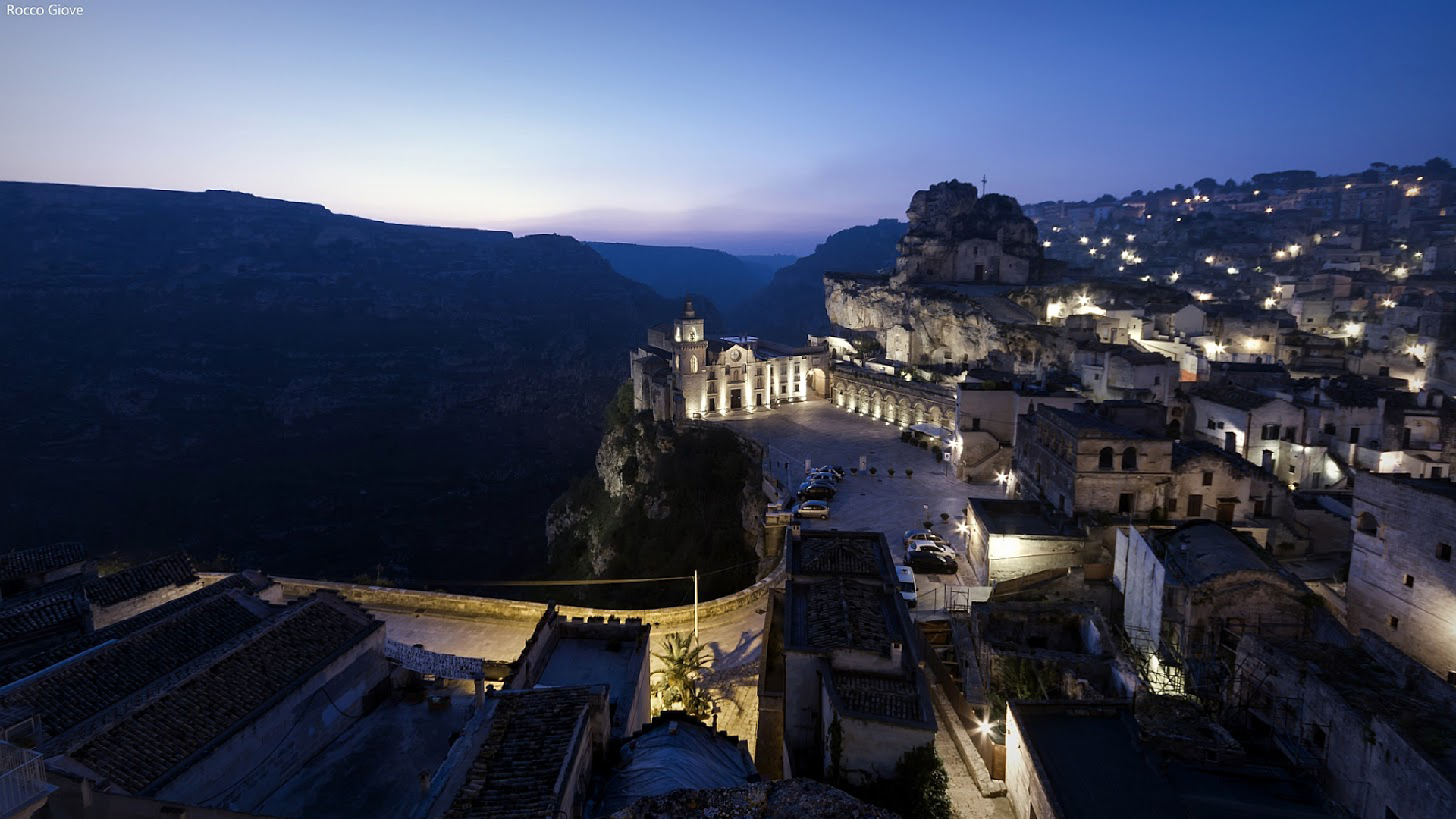 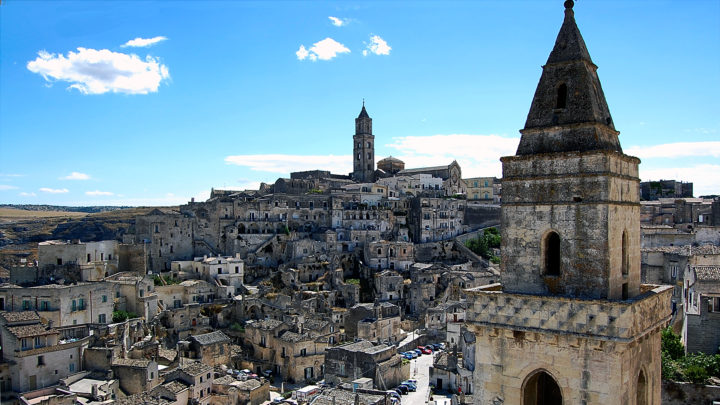 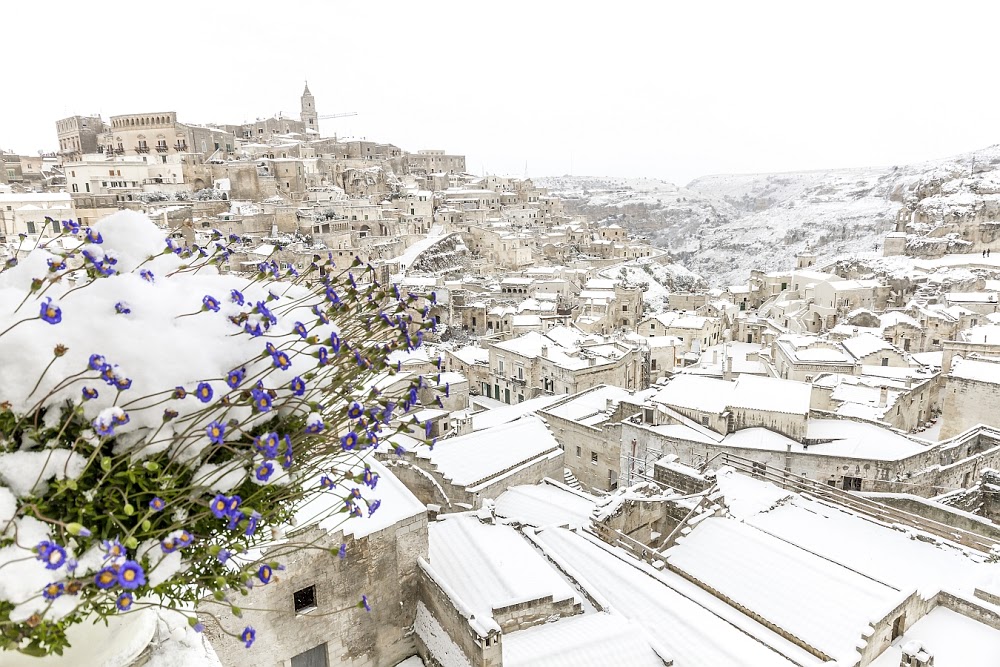 What you need to know before beginning a guided tour of the Sassi?

The Sassi are two districts (N.B.: a house inside the Sassi is not called “sasso”!), displaced around two valleys, at the bottom of which flew two water streams, called “grabiglioni“. The northern Sasso is the Barisano, while the southern is called Caveoso. Inside the two boroughs are several smaller areas with colourful names: o lammord, u parav’s, u p’ndàf’c, la strett d Paul u purch, u Molv etc. Dividing the two valleys rises the once fortified acropolis of the town, the Civita, hosting the beautiful romanesque cathedral. At the feet of the Civita and above the Sassi lays the Piano, the post-medieval Old Town, beyond which stands the contemporary Matera.

As you can easily immagine by the topographic description above, you have to walk up and down. Of course there are harder and easier routes, but the difference in height between the top of the Civita and the bottom of the valleys still remains of 40-50 meters. Believe me though: it’s totally worth it.

In the old neighborhoods you can still find public fountains but, expecially during summer, you’d better bring water with you. 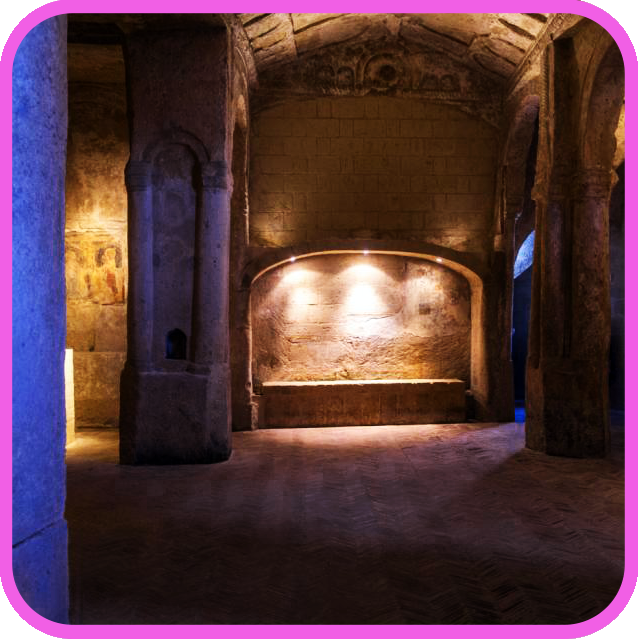 This rupestrian system consists of two cave churches and the pertinent dwellings where monks and nuns used to live. It’s located at the feet of the eastern side of the Civita, on the panoramic road that connects the two Sassi, by one of the most interisting archaeological sites of the city. The churches are two perfect examples of latin and byzantine religious architecture, one revealing fanciful “negative” architectural solutions, the other presenting some beautiful frescos. 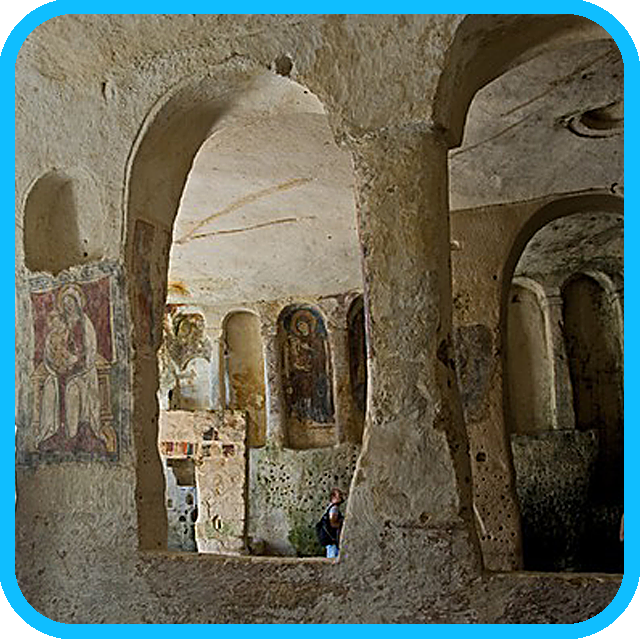 Malve (mallows) district, in the Sasso Caveoso, hosts one of the most ancient settlement in the Sassi of Matera. The convent of St. Lucia and Agata, founded by Benedectine nuns, it’s documented since at least IX century A.D. and presents some of the most important frescoes painted by XIII/XIV century local Masters, Rinaldo da Taranto and the anonymous Master of Madonna della Croce, plus many more latest paintings. 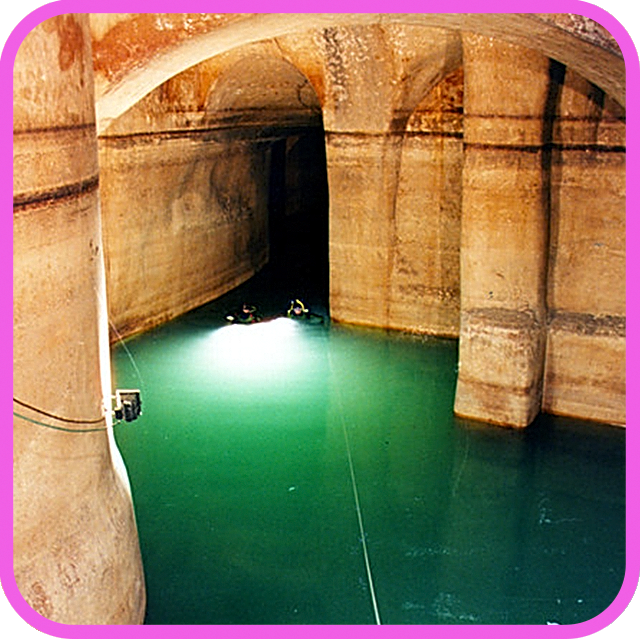 Monasteries or neighbourhoods, in the city or on the Murgia, every rupestrian settlement has its own water collection system that, passing through decantation tanks, channeled rainwater into underground cisterns. In Matera there are lots of examples: the bigger is the Palombaro Lungo, with an estimated capacity of 5 million liters of water, located on the Piano, in Vittorio Veneto square. Other, smaller but as much interesting, are visitable among the Sassi. 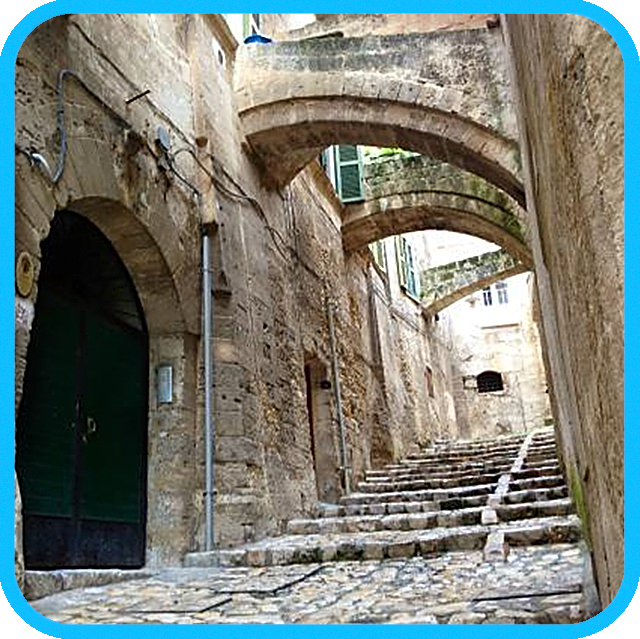 The Sassi, despite what residents and dealers think, should be covered only on foot. Hiding here and there there are signs of the complex, articulated architectural stratigraphy that testifies the long story of Matera, between stairs, gardens, courts and narrow alleys that suddenly open on breathtaking views. Among the many possibile routes, for example, one can follow the ancient track of the defensive walls of medieval town, from the top of the Munitissima Civita to the following expansion on the Piano. 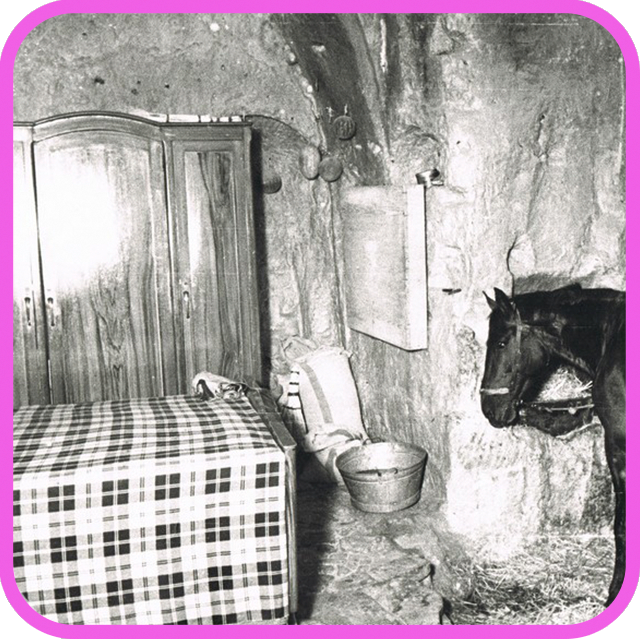 The quest fot armony between men and environment, in Matera, also determined the development of housing architecture. With the uncontrolled population growth in the Sassi though, that balance disappeared. The living conditions of the poors, forced to live with their animals in narrow spaces, hit the bottom between XIX and XX century, when, finally, people was forced to abandon their houses in the Sassi. Nowadays there are several “museum houses”, documenting life in the Sassi before the ’50s. 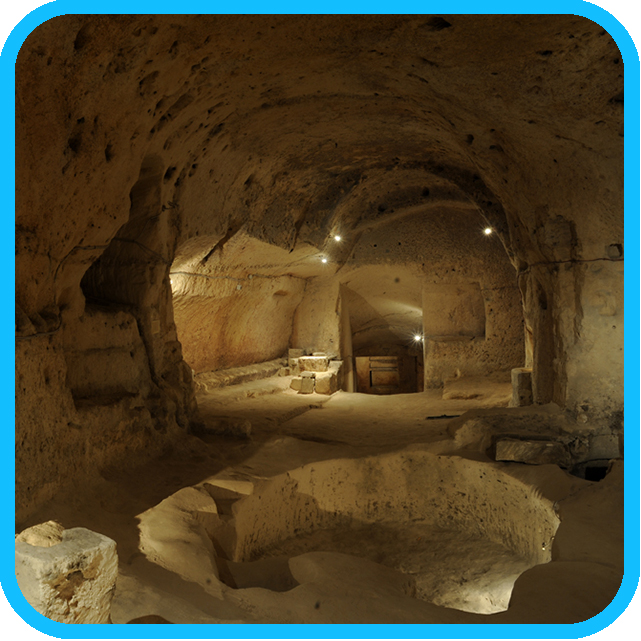 This large and deep complex of caves is a perfect example of the mastery reached by our ancestors in the art of shaping the rock and, at the same time, the centuries-long evolution that a lot of caves went through before they became dark, unhealthy houses.
It has been a cave church, then an oil mill, a wine cellar and a house, with several large cisterns that can be visited from the inside. You need an authorized tour guide to visit this. So, what are you waiting for? Contact us!

N.B.: all the attractions above (except the hidden routes, of course) require an entrance ticket, but some of them provide a substantial discount if you are with an authorized tourist guide.